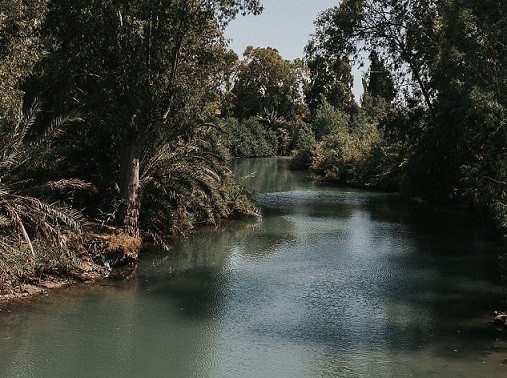 Nowadays, most evangelical Christians practice “baptism by immersion.”  By definition, this is the act of completely submerging an individual in water as a testimony to his or her commitment to live a Christian life.  It is usually performed by an ordained (or licensed) minister, and accompanied by a formal statement such as, “Upon profession of your faith in Jesus Christ, I now baptize you in the Name of the Father, and of the Son, and of the Holy Spirit.”  How did this tradition come to be, and what is the Biblical basis for it?

Perhaps you think that John the Baptist “invented” baptism.  After all, the first time baptism is mentioned in the New Testament, it is John who was “doing” the baptizing.  Would it surprise you to learn that baptism was practiced 1,450 years before John was born?

The first appearance of “baptism” in the Bible – though the word itself does not occur there – is in Leviticus 8:6.  Following God’s instructions (see Leviticus 8:5), “Moses brought Aaron and his sons” (to the door of the Tabernacle – see Leviticus 8:4), “and washed them with water.”   The occasion, of course, was Aaron’s dedication to the Levitical priesthood.  Thus we see that the original, primary meaning of baptism is that the individual being baptized is being designated to serve God as a priest.

480 years after Moses’ time, Israel’s King Solomon constructed a magnificent Temple in Jerusalem, to replace the old Tabernacle where Moses had baptized Aaron and his sons.  One of the items in that Temple was a “sea” described in II Chronicles 4:2-6.  Considering its dimensions (II Chronicles 4:2) and volume (II Chronicles 4:5), we would say that this object would make a good-sized backyard swimming pool.  Notice that II Chronicles 4:6 ends by saying, “the sea was for the priests to wash (that is, to be “baptized”) in.”  Thus we see that a true act of baptism requires a large quantity of water.  (The priests did not “sprinkle” or “pour” the water on themselves. The “sea” needed to be that large so they could be submerged in it.)

Throughout the Old Testament era, only the priests were thus baptized, never the rest of the people.  Between the writing of the last book of the Old Testament (Malachi) and the coming of John the Baptist (recorded in the Gospels), Judaism broke up into several different “denominations.”  One of these groups, known as the Essenes, are most famous (today) for their writing of the Dead Sea Scrolls.  The Essenes added a new concept to the Old Testament idea of baptism: in the Essene community, all essenes were considered as “priests” and thus any individual who became an Essene was baptized in a “sea” they constructed in Qumran.

The relevance of this fact to New Testament practice becomes clear when we realize that John the Baptist was probably a member of the Essene community.  However, while the Essenes recognized the idea that “all God’s people are priests,” they kept this knowledge to themselves, baptizing all Essenes but not baptizing anyone who wasn’t an Essene.  John the Baptist took the practice to the next logical step: he began to baptize everyone who came to him repenting of their sins and expressing a desire to live for God (see Mark 1:4-5).  Thus the New Testament principle of “the priesthood of all believers” (clearly enunciated, for the first time, nearly 1,500 years later, by Martin Luther) began to be established.

Notice that John, too, needed “much water” (John 3:23) to do his baptizing – again confirming that true baptism is done by the procedure nowadays called “immersion.”

The fact that Jesus Himself was baptized by John certainly adds a note of authentication to John’s views of the meaning and method of baptism.  Note, for example, Jesus’ statement that the purpose of His being baptized was “to fulfill all righteousness.”  Though it is not specifically stated in the Bible, it is agreed by most evangelical Christians that another meaning of baptism is that the individual is expressing a desire to “identify” with Jesus by doing what Jesus did, and for the same reasons.  This belief is usually expressed by the statement that so-and-so has decided to “follow the Lord in the waters of baptism.”

Note, too, that Jesus was baptized by immersion.  No other sense could be made of the statement in Matthew 3:16 that after His baptism he “went up straightway out of the water.”  (It would be impossible for Him to go up out of the water unless He had first gone down into it.)

At the close of His earthly ministry, just before ascending to Heaven, Jesus gave His disciples the so-called “Great Commission” (Matthew 28:19-20), a command (not a suggestion!) which included “baptizing” as one of the activities His disciples were to continue to “observe” . . .  “even unto the end of the world.”  Thus there would be no excuse for the Christian Church to decide that baptism is no longer relevant and should be discarded along with other culturally outmoded practices such as following dietary regulations that Jesus specifically stated were no longer valid (Acts 10:9-16).

The Book of Acts contains many references to baptism, all of which combine to remind the reader that all Christians should be baptized (Acts 2:38), whether they be male or female (Acts 8:12), white or black (Acts 8:36), former persecutors of the Church (Acts 9:18), Gentiles (Acts 10:47), or believing spouses, children, or servants of believers (Acts 16:31-33).  Notice that in all of these cases baptism followed almost immediately after repentance and faith.  Nowadays it is more likely that a time of teaching and preparation will intervene between the initial profession of faith and its “acting out” in baptism.  But no such time is required by Scripture; indeed, Scripture would seem to imply that any such time should be as brief as possible (Acts 8:36).

Some further meanings of Christian baptism are seen in the following verses from the letters of the Apostle Paul:

Romans 6:3-5.  Baptism pictures the believers’ death (firstly, to sin, and secondly, at the end of this present life), burial (which confirms death, and is symbolized by the submerging of the candidate in water – just as one is only said to be “buried” when completely covered by the earth), and resurrection (firstly, to a life of holiness, and secondly, when Jesus comes).

Galatians 3:26-27.  Baptism is equated with “putting on” Christ, just as the candidate (after being baptized) will, of course, remove his or her wet clothing and put on clean, dry clothing.  (See also Colossians 3:8-14.)  Note, too, that Galatians 3:28 emphasizes the universality of Christianity, which tears down all such distinctions as those between Jews and Gentiles, slaves and freemen, men and women, etc.  In today’s world, we would do well to recognize that this verse also implies a tearing down of such distinctions as black and white, rich and poor, old and young, “city” and “country”,  “Eastern” and “Western”, “Northern” and “Southern”, “geek” and “jock”, etc., etc. etc.  Baptism is for everyone who receives Jesus as Lord and Savior.

Titus 3:5.  Baptism doesn’t “save” you!  GOD saves you, and He does so in response to your profession of faith in Jesus (Romans 10:9).  This is what the Bible means by the baptism “of the Holy Ghost (or Spirit).”  (See Matthew 3:11.)  Water baptism is merely a testimony to your salvation.  You were saved the moment you accepted Jesus as your Savior.  You should be baptized as soon as possible after you have done that.  But your salvation doesn’t depend on your baptism, or else the thief on the cross (Luke 23:42) would not have been saved, since he never had the opportunity to be baptized.  So, if you never have the opportunity to be baptized, you will be just as saved as he was.  But if you have the opportunity, you need to obey Christ’s commandment and be baptized as soon as possible. 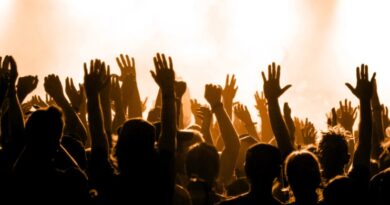 Who Are the True Christians?

Which of the many thousands of Christian groups is authentically Christian? This question is based on the misconception that there 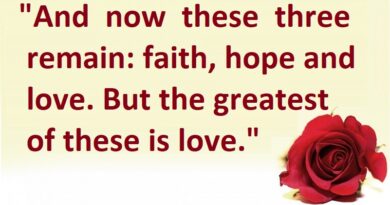 Wikipedia, the free encyclopedia,  lists five Greek words for the word love.  They are:  Aga’pe, E’ros, Phili’a, Storge’ and Xeni’a. Let’s take a brief look at 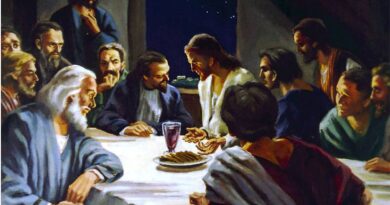 Another Consideration About the Lord’s Supper

At 1 Corinthians 11:23-26 Paul, referring to the last meal that Jesus shared with his disciples, wrote, “For I received